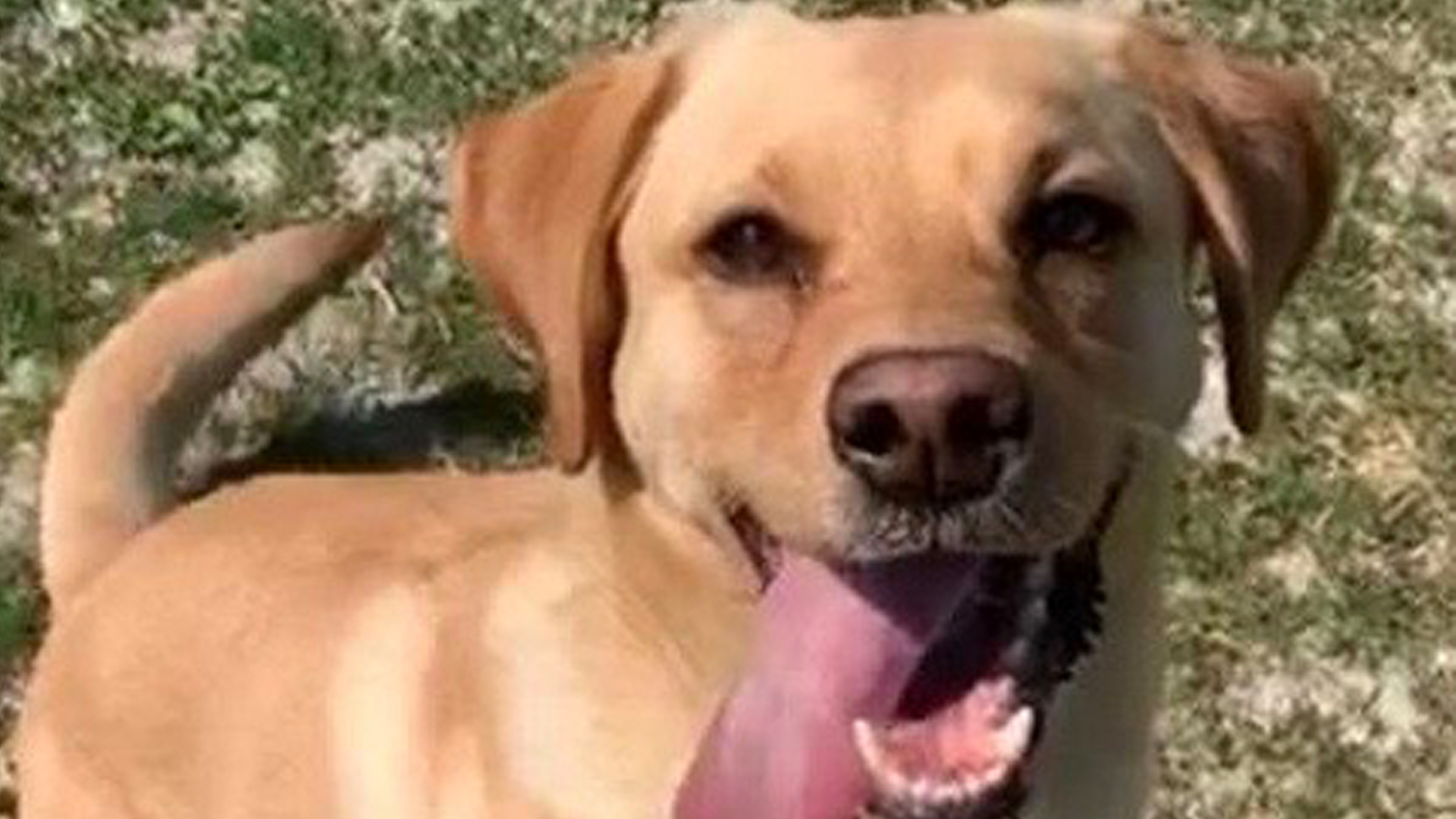 “Like many dogs that come through Labrador Rescue, Mabel found herself in the wrong home” Susan Platford begins. “Mabel was a nervous puppy, who’s behaviour had deteriorated to the point where she was lunging at other dogs, trying to attack them and was wearing a muzzle whenever she was walked.”

Mabel’s future was uncertain because she would not be easy to rehome. So I asked a dog behaviourist to assess her and one of the things that struck me forcibly within their report was the view that Mabel was VERY bright and needed a job.

As one of our experienced foster homes has working gundogs and is very committed to training, we moved Mabel into foster care. Sally Oliphant takes up Mabel’s story…….

The behaviourist’s report was full of training tips about how to prevent Mabel’s behaviour escalating into aggression, but the underlying positives were that Mabel signaled her apprehension; that when introduced properly to calm, polite dogs she was fine; and most importantly that she was a fast learner who showed all the traits of a dog who needs a job to do.

And so the challenge of helping Mabel to overcome her anxiety and nervous aggression began. 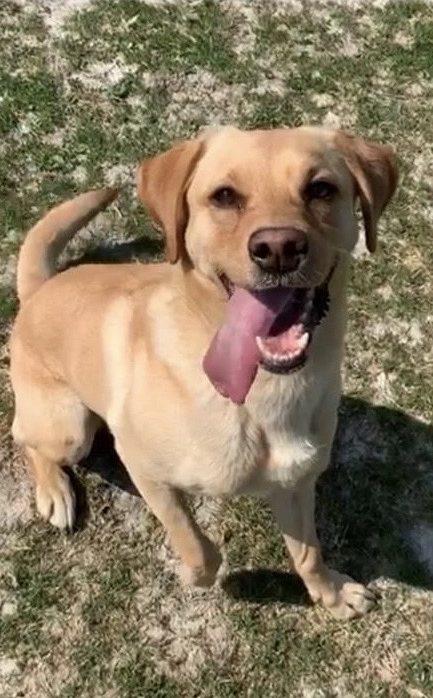 I have 5 Labradors of varying ages and an elderly terrier, all of whom can be calm and polite when needed, so with Susan’s help we introduced Mabel quietly to each of them in turn, allowing her to take her time and backing off if she showed any signs of discomfort….it all went remarkably well and within 30 minutes we all went for a walk together, off the lead and she had a lovely time dashing about everywhere. Was this really the dog that I had read about?

Mabel has a lovely nature and had never been aggressive with people. She was very polite and obedient houseguest but her anxiety was revealed by her body language – invariably she was curled up into a small ball, usually with one eye open and never fully relaxed. 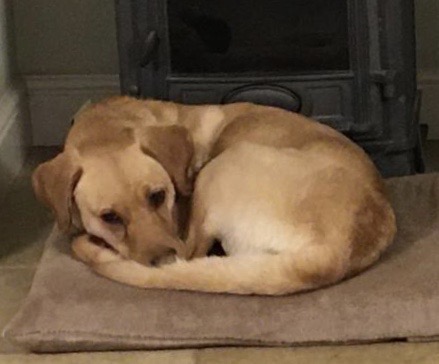 Her problem seemed to be in understanding the behaviour and body language of new dogs, both on and off the lead. The behaviourist had given lots of tips about tackling this nervous aggression, so we tried them all (apart from wearing the muzzle) and I persuaded friends and neighbours with dogs of all ages, sizes and temperaments to practice with Mabel, so that she had lots of positive experiences in meeting new dogs.

It didn’t always go according to plan in terms of her behaviour, but I felt that she was making progress. And by this time she was starting to relax more and even started playing with my younger dogs.

But the real key to Mabel was to get her to use her brain and her nose!

Mabel’s recall to the voice was excellent from the start but her ability to copy my others and learn the verbal commands, hand signals and whistle commands that I use was amazing.  So I started basic gundog training with her, and to say Mabel enjoyed her training was an understatement! She took to it so well and so quickly it was an absolute joy for me. We did little bit every day and it was easy because when training her focus is absolute and this really became the key to overcoming her aggression with other dogs – when “in the zone” she is totally focused on her handler and completely ignores other dogs. It was also interesting to notice how tiring it was for her to use her brain – and how much more relaxed and secure she became with all the positive re-enforcement of doing so well. 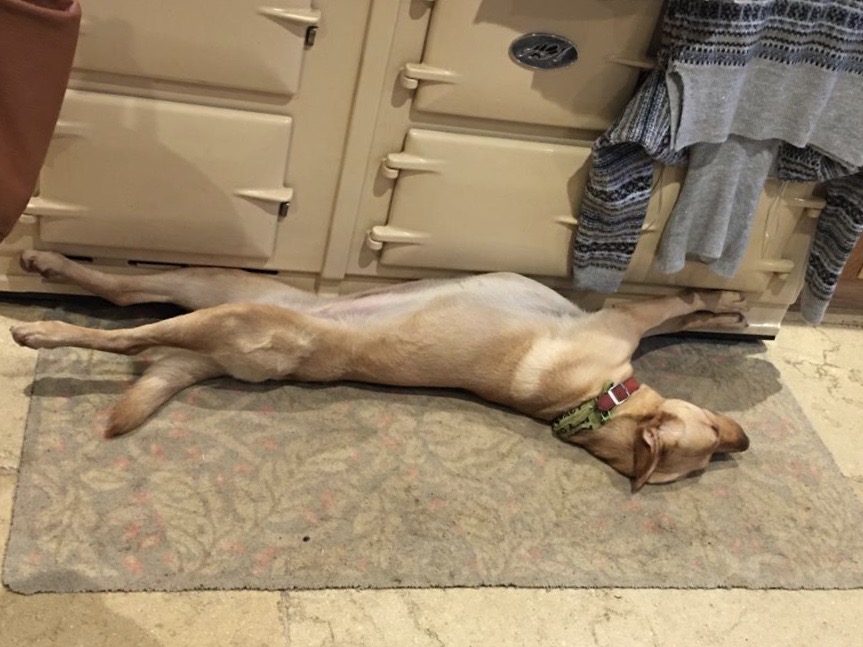 Once she had mastered the basics, we went to a group training session – high challenge for Mabel because of all the other dogs, but not a problem because of her focus. And her increased confidence meant that she seemed to be more relaxed about meeting new dogs – as long as they are introduced properly.

In the meantime, a good friend of mine had been coming over to train with my dogs during the summer, to fulfil his ambition of picking-up on a shoot and having his own gundog. He had been thinking only in terms of a puppy….until he met Mabel!

I think it was possibly love at first sight! For both of them!

The only issue for James was whether Mabel would actually be able to do the job……..

For some time I’d cherished a dream of training my own dog to pick-up on pheasant shoots, but hadn’t done anything about it.  After a chance meeting, I grabbed the opportunity to have a go myself, working with Sally’s dogs. It was every bit what I had imagined and I was very lucky to be able to work one of them in the field last season.

I’d really ‘got the bug’ and enjoyed the training as much as the actual working because of the bond you develop with your dog and had started to look for my own puppy to train. But the idea of a puppy all changed when I met Mabel.

My immediate thoughts were “What a good looking dog” and when I watched her training, it was clear that she was just what I wanted. The icing on the cake was the immediate connection between the two of us. I understood all about her background but could see the progress she had made and I was convinced that with continued training she would overcome her nervous aggression.

Mabel came to stay with us for New Year to cover a holiday and both my wife and I were amazed how quickly she settled into a new home and immediately became part of our family. Needless to say, she never really went back!

Sally & I continued to train and from picking up her first dummy on 8th December, we took her for a ½ day on her first shoot on 31st January, where she picked up her first bird. In fact she was such a success that the Gamekeeper invited us to join the picking up team for the next Season. 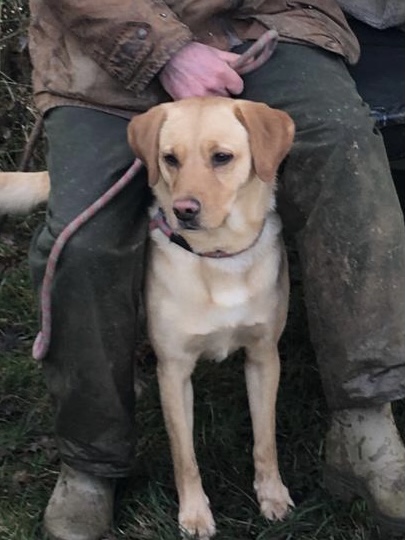 With such excellent raw material, I joined our local Gundog Training Club for weekly training sessions. Lockdown meant that these sessions stopped but because I was working from home, Mabel and I spent more time together and our bond deepened – she appointed herself my Office companion, foot-warmer and timekeeper, reminding me when it’s time to go training! 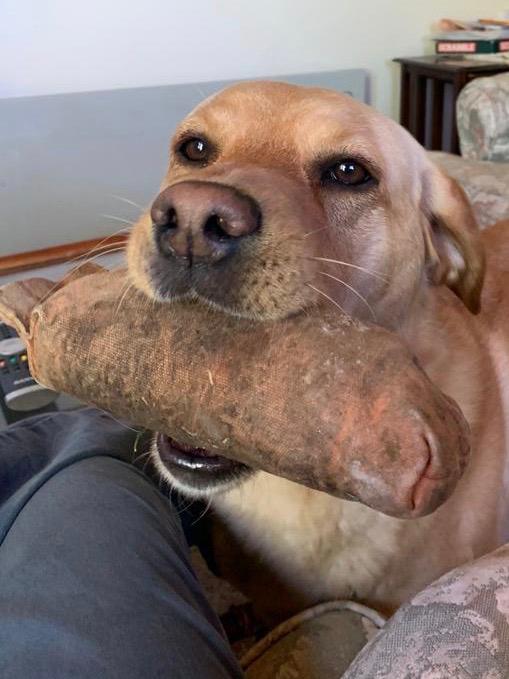 Training sessions stopped but online Club videos for the Bronze Working Gundog Certificate gave me a framework to continue Mabel’s training, submitting videos of our progress for assessment. Weekly training sessions are back now and it’s here where Mabel excels – I’ve had many complements about her concentration levels and willingness to please which are at the forefront of everything she does. She is so much more relaxed in that environment and will play with the other dogs after training.

For me this demonstrates the importance of not only keeping working dogs fit in body but also in mind. I’m confident that come October, I’ll have a dog trained and ready for the field. 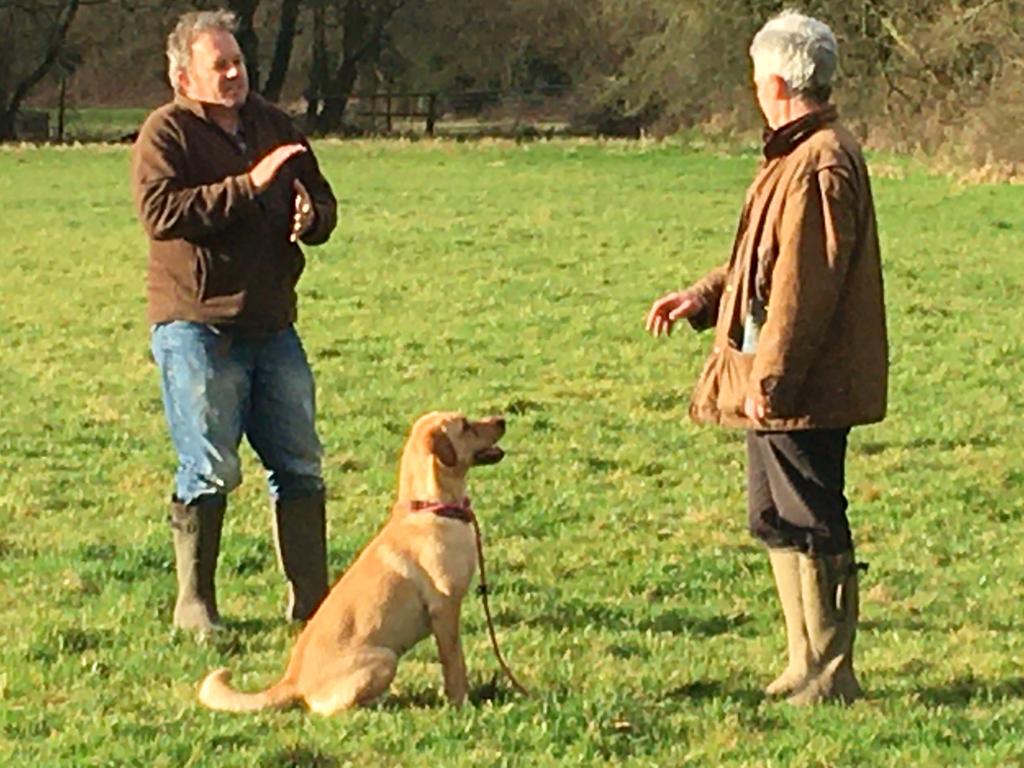 Having read Mabel’s story, you might be surprised to hear that Mabel has also acted as a Pets As Therapy dog at a local convalescence home, where she was adored by all and would sit quietly at the feet of whoever would be willing to give her a smooth in return. This is a gauge of how much more confident she has become over the last 6 months.

There have been challenges along the way, and for us managed introductions to new dogs are the norm.

But to me, she’s the dog of a lifetime and she repays me on a daily basis with love, loyalty and affection. 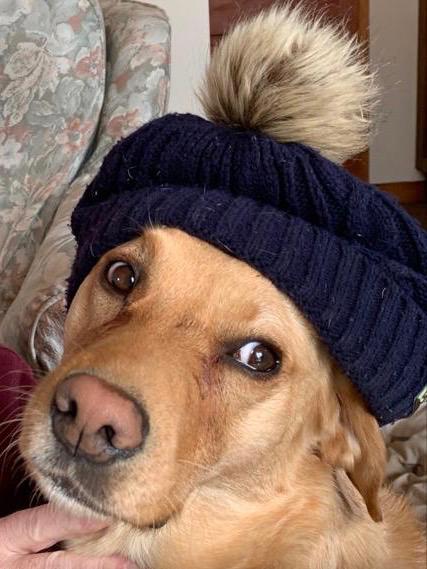 I’d like to thank LRT for the ongoing support they’ve given Mabel and I, and she definitely has a forever home. I’d recommend LRT to anyone looking to re-home a dog, and rest-assured, they’re not all as challenging as Mabel!

HOW THE LABRADOR RESCUE TRUST WAS STARTED 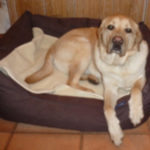 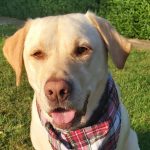 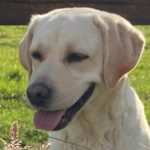 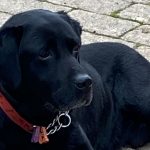